Elder Hardee Green is originally from Oxford, NC and the 5th of 6 kids born to James Dennis Green and Luster Dean Green.

He is a retired soldier with over 28 years in the United States Army active duty. He’s traveled worldwide on different assignments starting as a Second Lieutenant through the rank of Colonel. 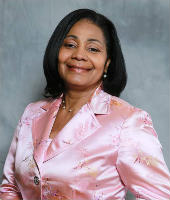 Co-Pastor Patricia Green is originally from Cuba, Alabama, and is the thirteenth of fourteen children born to the late Minister Lonzy (Tellie) Randolph Sr. Co-Pastor Green currently resides in Woodbridge, Va. with her husband Pastor Hardee Green of Oxford, N.C., who is a Colonel in the United States Army. They have three sons, Hardee Daronta’, Lawrence Gabriel and Jonathan Michael Green. She was educated in the Sumter County Public School System and attended Sumter County High School in York, Alabama. She continued her education at Alabama A&M University, Normal, Alabama, where she received a B.A. degree in Communications and completed course work for a Masters Degree in Speech/Language Pathology.

Co-Pastor Green is a house wife, mother, and Substitute Teacher in the Prince William County School system. She is a member of True Light Ministry, in Woodbridge, Virginia, under the Leadership of her husband Pastor Hardee Green where she operates in the capacity as Co-Pastor, and works diligently by his side in the ministry.

She accepted the Lord as her personal Savior in 1981 in her dorm room while attending college at Alabama A&M University. The Lord spoke audibly to her and said “He had heard her cry and her supplication,” and ministered to her daily through the word, and encouragement of other Christian youths until finding a church home.  After seeking God for a church home, she was led to the True Light COGIC in Huntsville, Alabama through Christian friends where she became a member under the leadership of Dr. Terrell and First Lady Dr. Pearl Harris and served in numerous capacities for fifteen years until goining in Holy Matrimony to Pastor Hardee Green then relocating to Lindenbach, Germany where she excepted her call to the ministry and received her  certificate as Evangelist/Aspiring Missionary and Church Mother’s Assistant to Mother Carolyn Bell under the leadership of  Pastor Charles Burr, Abundant Life COGIC (Kitzingen, Germany).  Co-Pastor Green served as Leader of the Women’s Department under First Lady Patricia Tramil and Superintendent Robert Tramil, Pastor, House of Praise COGIC, Clarksville, Tennessee. She received her certificate of ordination as an Evangelist/Missionary under the leadership of Superintendent Dr.  Melvin and Claudine Austin, Pastor of New Bethel Cathedral COGIC. Served with the Media, Women’s, and Marriage Ministries while serving under Overseer Vance and First Lady Nicole Oldes, Senior Pastor, of Liberty House International Ministries, also obtained certificate of ordination as Elder.  After their release, she was appointed Co-Pastor by her husband, Pastor and Founder of True Light Ministry to serve by his side in the Ministry. Co-Pastor Green is saved, sanctified, filled with the Holy Ghost, loves the Lord with all her heart and His people, and have no other desire than to serve the Lord, please Him and do His will for the rest of her life.